Disclaimer: Not as many pics as last LAN, I slacked, sorry!  I promise more pics on my next adventure to LANS!

It all started a night before the LAN.  PandaQ and I hung out the night before, and he had means to screw me by suckering me into pulling an all-nighter of dota.  Thankfully, I had the presence of mind to say fuck you to him and avoided harm.  I learned my lesson from my last LAN, and the importance of sleep.  Truth is, I'm an old man now and I just don't have it in me to do an all-nighter anymore, not at the cost of my sanity.  So we played dota only to like 3-4am and went home.

Anyway, it was time to pickup Annihilate.  With roughly four to five hours of sleep, I went downtown to the greyhound station looking for him.  Mind you, I had never seen him before so, first time meeting is always a little awkward.  While texting each other restlessly trying to locate each other, we soon realized that we were right beside each other.  Though not for long, it was certainly a funny feeling.  After that, we were off to the venue, Berkeley Church.  On our way there, we just randomly ran into PandaQ on the streets (like really, what the fuck).  Together, we arrived at the venue, and we were greeted by the Russian Duo of Misha and Dima.

I then saw ImaSheepSux and said hello to his crew too.  It was my first time meeting Brood_Star and DarkFalco.  Brood_Star was a lot taller, and more personable than I imagined (he's actually a nice guy).  I thought DarkFalco was white too.  Nope!  They were, dare I say, friendly and pleasant folks.  Clairvoyance was running late, but that's his classic self.  That guy's always late, and you have no way of reaching him once he leaves home either.  You are completely at his mercy once he steps out of his doors of making it to places on time.  He made his team wait outside in the heat for at least an hour I think.  LMAO WAT A CLOWN!! Well Played! 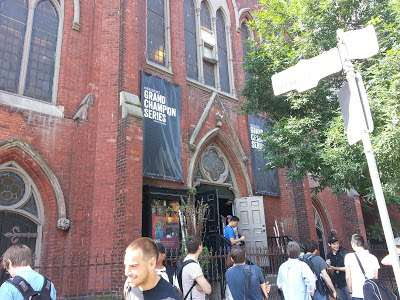 Outside of the venue, where players lined up to get in.
Each player required a ticket and a signed waiver for your soul. 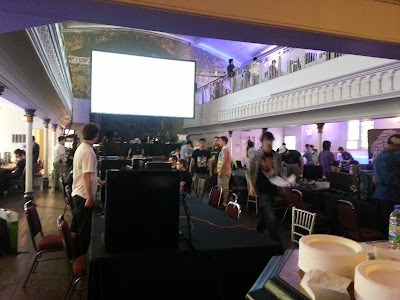 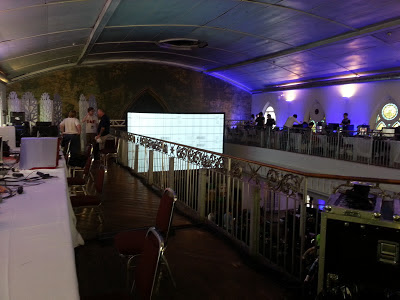 It wasn't a large venue by any means (unlike ETS, where it hosted 1200 players).  But it was nice.  I was worried about the air conditioning, but it was quite cool when we entered the place.  Though it became considerably hot throughout the day.

While the venue opened at 10am, nothing really happened until about 2pm.  During that time, our team prepared the tournament by trying to get used to the settings.  Due to the limited Internet connection at the venue, there were some packet losses, which made projectiles invisible from time to time.

The level of hospitality was just unreal.  I've never seen anything like it.  Literally everything on the venue was free.  All sorts of soft drink from sodas to redbull; free.  All the food; free, and they fed us all day with pizzas, hotdogs, and a gourmet dinner.  There were deserts of freshly baked cookies, and these kickass guys who were serving flash-frozen ice creams with liquid nitrogen.  Not forget to mention they were throwing out prizes left and right.  The NADota crew certainly got the best of it.  The sum of the prizes won by NADota members easily exceed grand in value.  It was really cool, and welcoming atmosphere.  You knew the organizers weren't there to make money.  They were there to make sure everyone enjoyed the event and have fun. 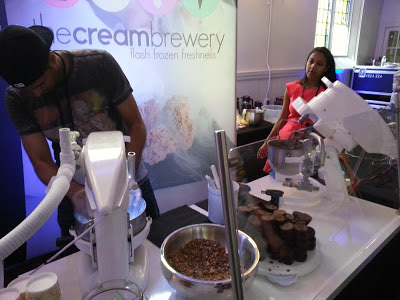 These guys were literally here until the end of the day serving free premium ice creams all day.

It was sort of cool to walk around and see this many dota players, sharing all the same passion and love for the same game that devoured my very soul and ruined my fucking life.  As Annihilate and I were just walking around, checking out the venue, we ran into this hardcore motherfucker with a dota tatoo on his forearm: 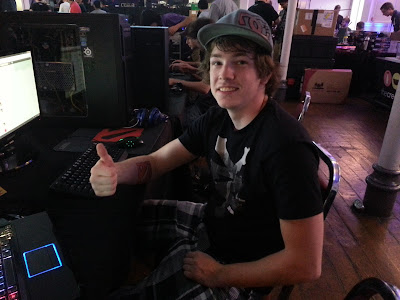 It was none other than Fuzzybear.  He had come with his NADota pickup team of BigBootyBoi and Dota_Monk.  Their seat suckd ass because right across from their seat was this roid user who played CS:GO, and he yelled all day.  How Dota_Monk fights the captain of LGD.int but not this roid user guys. What's his problem, I thought he's a scrapper. 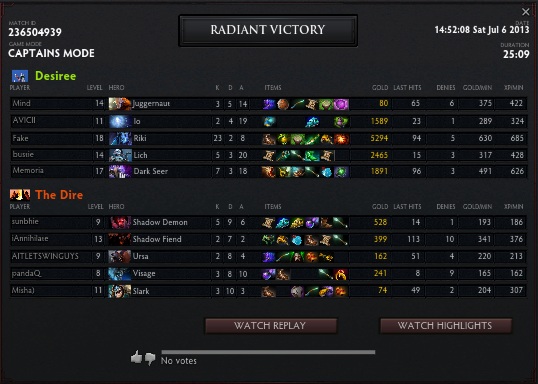 Oh man, what a disaster this was.  First off, I acted like a complete clown before and during the draft phase.  I thought the competition was going to be a joke like it was in two previous LANs, and they really didn't help the cause to make me think otherwise.  You see, they were right beside us, and was worried that we would ghost.  So, they had this plank of styrofoam shit to block off vision.  Which, I found to be a little excessive (I mean, come the fuck on).  And so, after some mild BM'ing and whatnot, we fucking lost.

And the way the brackets were set, we weren't going to play for another 2-3hrs.  So I had all the time in the goddamn world to think about my clowny acts and getting styled on on stream.  Well, we knew what the problem was; my draft.  And fucking Misha.

For what it's worth, the team we had faced; Desire, was a surprisingly good team.  It was a well deserved loss, and a lesson I won't forget even in the future.  Thankfully, we had loser bracket to rely on to make up for our mistake.  Shoutouts to Jubei and his shit eating grin whenever he came by our station. 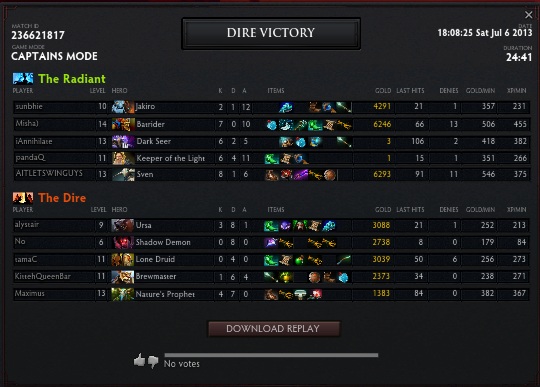 Not much to say about this game.  All I know is that their mid player; Brewmaster, was a girl.  Which I thought was pretty interesting because when you have a female player on the team, they're often pigeonholed into supports.  This was a very easy game, the kind of game I expected our first game to be. Sigh... fucking Misha... 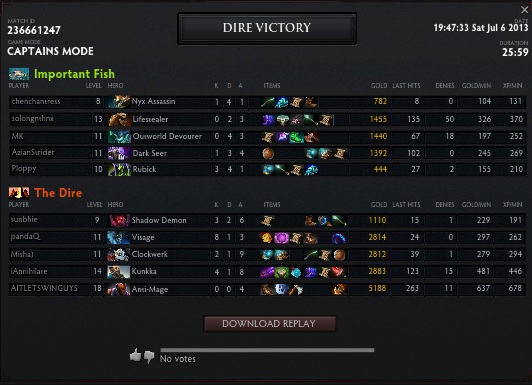 Okay, so, these guys were sort of stupid.  Our team name was Siren, obviously having fun with now defunct Team Siren of LoL.  Perhaps a little classless, we were just having fun with it.  The way the tourney worked is that the organizers call up the captains of teams, tell them who they're against, who's on which side, etc. So, I yell out for the captain of their team, and I ask him what the password is.  And I swear to god, he just looks at me for a second, and spits out "gay", then turns around and walks back to his team.  I was like..what the fuck...this nigguh...

Not much to say about this game either.  They got rolled.  Note the dumbass' score. 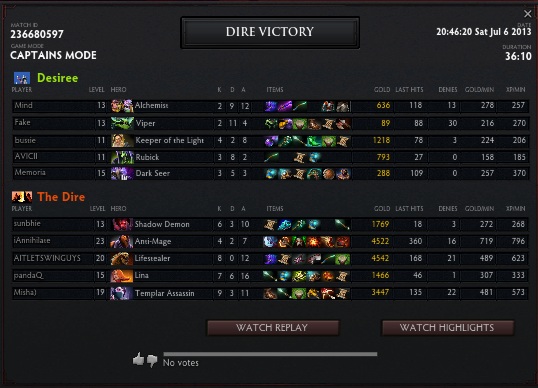 Well, we just banned wisp and lich (thank you based Brood_Star).  And frankly, they were pulling mid like champs with Wisp earlier, and I didn't want to deal with that shit.  The Viper pick sort of freaked me out against our TA, but Misha held his own and played well.  They, for some reason aggro trilaned against us and got lost the lane pretty badly.  I don't know, not much to say.  We just played ABC dota, but I played pretty crisp this game and was happy about that. 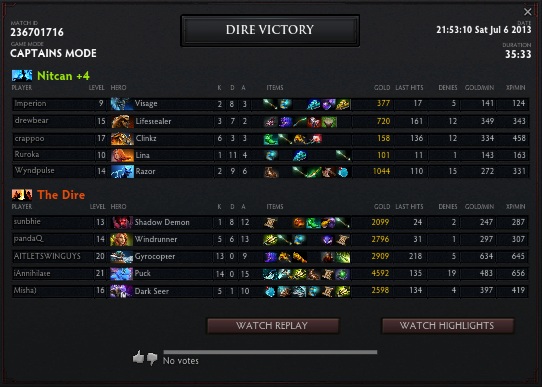 I had no idea who these guys were.  Misha seemed to have known one of them.  All I know is that PandaQ and Dima beat the shit out of their aggro tri somehow.  I have no recollection of what I was doing this game. PandaQ was on some next level shit and was landing some crazy shackles. 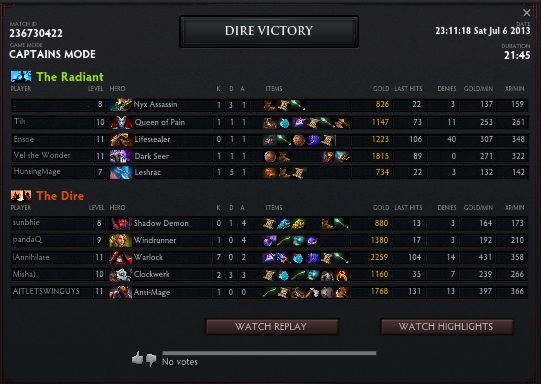 A team with the oldschool legends like Mo, MiracleChipmunk.  I don't really know much about them, though I do recall playing against them a couple times back in the old days of DotA Allstars.  I had a friend who really didn't like MiracleChipmunk for whatever reason.  I think his signature was QoP back then?  In Team Pandemic?  Mo hung out with Chu I think.  Anyway, they may have been tired of waiting for games, they didn't seem like they were enjoying themselves too much.  They played pretty poorly, perhaps not to their potential because maybe they were tired.  PandaQ got some sickass shackles that made people yell in disappointment and amazement.  I don't know if it was the audience or the players, but they were indeed some sickass shit that saved my ass.  They called gg in 20min once they realized that our warlock had an 18min scepter and an AM growing in the back like a tumor. 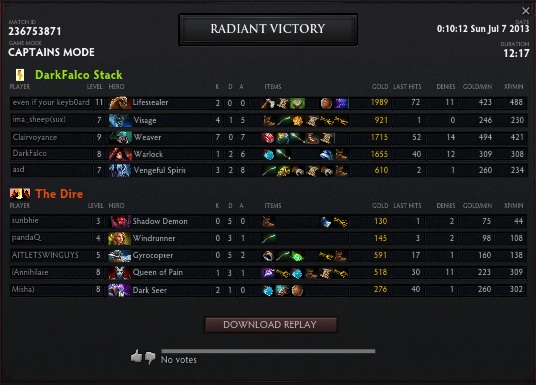 Well, what can I say.  We got raped.  It was mainly me, I choked like crazy, as you can see in my gpm/xpm.  I haven't gotten raped like this in a while.  But I learned some stuff, so it's all good.   Jubei played really well this game.  I'm sorry we couldn't give you guys a better game, guys.  Congrats on the win. 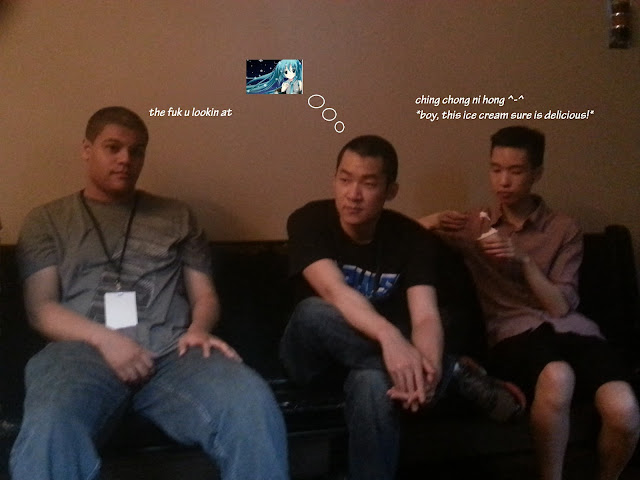 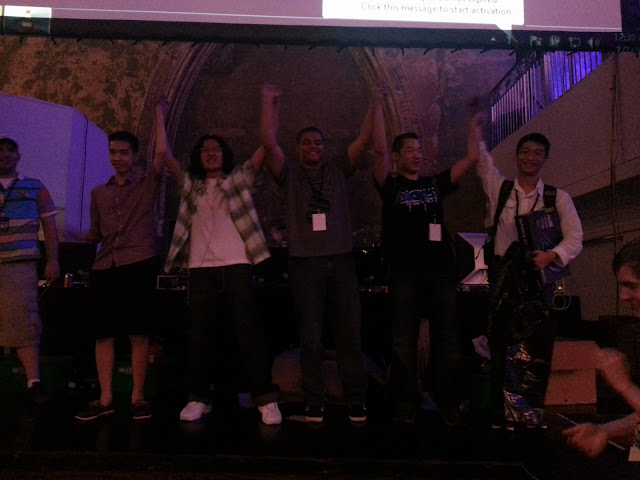 After it was all over, it was time to go home.  Overclock LAN was really good but this was something that was a little disappointing.  Because the event was only for one day, we didn't get to really hang out after it was all over.  Otherwise, people would have to walk around with their gear and that's just too much hassle. Anyway, we said good byes to each other and went about our own ways. 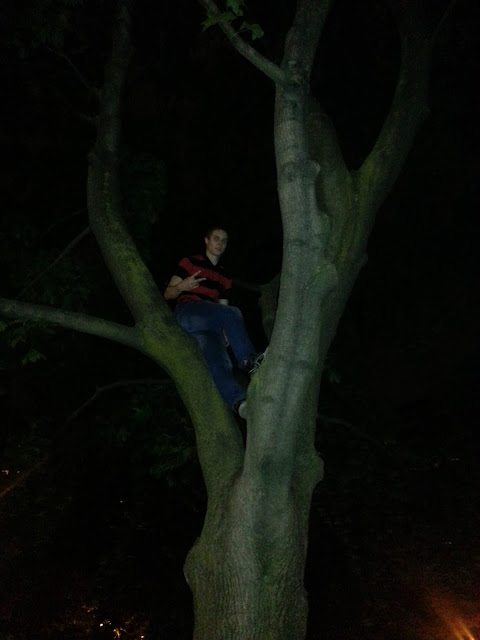 Except for Dima, who just randomly decided to climb up a tall ass tree for no goddamn reason, never to be seen again.  May his Russian ass soul rest in peace.
Labels: Dota 2