This is a follow up of my pub experience in China.  Which is a little outdated already, but most of the core values are still the same.  China naturally evolves to abuse the easiest and most effective method of beating the game.

SEA is a bit different.  Reddit will have you believe that SEA is the worst region by far, and while there it is sensationalized, much of it is also true.  And I've experience hundreds of games on KR, USE, USW, China, and EU.W.  SEA certainly stands out as an exceptionally awful place.  Which is kind of sad in a way because for people born in SEA, it's all they have.  But maybe I think worse of this because I've had taste of the better?

Let's start with the goods:


The times when the games are good, they're good
It doesn't happen often, but when everyone's pleasant, the game experience is really good.  Sometimes I get lucky and get two in a row.


Games are softer, and thus it's easier to carry with certain heroes
Which are often mid heroes.  SEA meepos are world class, there are a lot of MMR boosters that wants quick MMR and that really paved the way for strong meepos.  The problem is that people are prone to throw, but if you are playing the right hero strong enough, they tend to get the job done.  Yeah, I don't know if this is a good thing or not now that I've written it.


I don't know what else is good about SEA.  Honestly, there are a lot of great guys that play there.  It's just greatly overshadowed by all the awful things...  Sorry.  Here goes the bad parts:


Low Skill
Objectively speaking, SEA is most definitely low skill compared to China.  Players do not press their buttons as competently, they do not make sharp rotations as the Chinese, and are just about every way inferior to Chinese players.  Which isn't that weird because the Chinese are honestly pretty pwnage but kind of sad because they have a bigger playerbase than China.

A lot of SEA pros choose to play in China servers too.


Attitude
It's like the one-two punch along with low skill, and perhaps not mutually exclusive.  This one is hard to explain because which region doesn't have players with attitude.  I suppose when I say attitude, what I really mean is the core mentality that plague SEA altogether.  I'd say it's a crab mentality... on crack.

If there's any blood shed at bounty runes, you are about to get a refreshing splash of SEA acid.  If the same were to happen at China, and it happens all the goddamn time in China, no one even bats an eye.  Except for that one Chinese guy who is perpetually mad but he's rare.  In SEA, it's like every game without fail someone will try their hardest to cancer the game up.

The thing about bad attitude is that it is contagious.  I fall prey to this just as anyone else, and I was often the primary offender myself at a time.  It starts putting people in a mood where they no longer care about winning because really, fuck that guy.  Most days, I persevere and try to stay above the acid.  The days I cannot, I succumb to it and flail about the ocean of acid haplessly as anyone else.


Ego: "don't blame"
Perhaps the root of all evils.  One common trait I feel often about SEA players is their complete and absolute lack of humility.  It's always "don't act pro" or "don't blame" or like listing your previous mistakes and slander you at every petty opportunity.  It's an ugly, ugly trait.  It's a struggle to get any message across because everyone's so sensitive and they take offense to everything.

"Don't blame" phenomena is quite enraging.  I think what people meant to say were, "let's not dwell on mistakes and focus on the game", but it is very much so used in a literal sense and I can't see why but to protect people's precious ego when they're fucking shit up everywhere.

I don't know why blaming has such a bad rep.  Someone must be fucking up to be losing fights repeatedly when you are leading 10k gold/xp, and that person better know what's up because we don't want to lose the game.  But no one wants to own up to mistakes and it gets thrown around like some sort of a social statement to shut everyone up.  This isn't some no means no to rape, I just want you to stay back on dazzle so we don't lose a teamfight!

This whole "don't blame" is the epitome of a SEA mentality.


Aftermath
Perhaps the worst part for me when playing in SEA is that I start hating everyone.  This is irrational because not everyone is a contributing factor to bad games but because the negativity is so fierce and so persistent game after game, that it starts to acidify me.  I get really tired of convincing my team to calm down all the time, mute another, and giving them directives to focus on the game so that aren't further muddying the waters.  I shit you not, every game really is like this.


Are some nations worse than other
Probably not.  Majority of SEA playerbase is supposed to be pinoys and they're mostly okay in my experience.  English isn't really a problem either.  Everyone speaks enough English to play dota.

You get occasional Aussies and they're often really bad.  Their MMR doesn't really reflect properly to other regions because of poor population, but they're generally such nice people that it's hard to even get mad at them.

Indians get bad rep too, but I don't meet them often.  The ones I do are often leaderboard players and they're cool.

Boosters
MMR boosters and boosted accounts are bit of a problem.  In fact, most of the players above 5500 are pleasant to play with.  And when some are really terrible, I suspect that they're actually account buyers.  I think MMR boosting is quite real in SEA.  When I go to sites that sell MMR boosting, most of them seem to be from SEA.  A lot of pros and semi-pros partake in it shamelessly, I dislike the culture.  Viets are real ham with meepos.  You see a player and his name is Viet with like funny ass alphabets and shit then you better get ready to fight a dope ass meepo.


In closing...
I seriously didn't think this entry would end up with so much negative things to say about SEA server.  I must say, a lot of the good does exist and there are fun games.  It's just... they don't happen often..  I guess the bad sticks out like a thorn.  Below are list of funny/sad captures of SEA, made months ago in span of two days.  Not much has changed, and you can have a taste of how bad it can get.  I stopped making these after the second day because I felt kinda sad and unnecessarily vindictive about it. 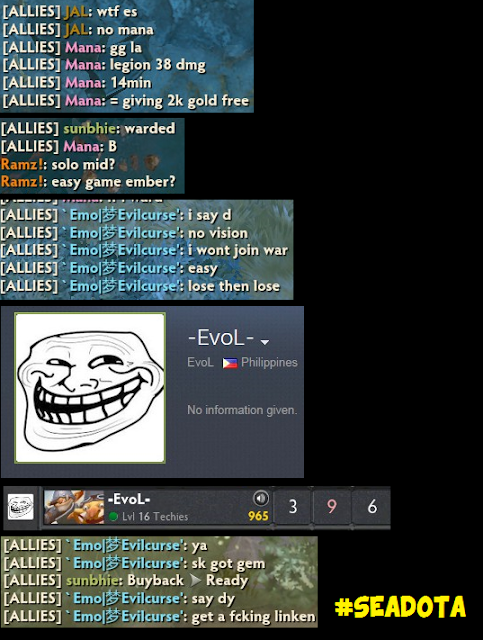 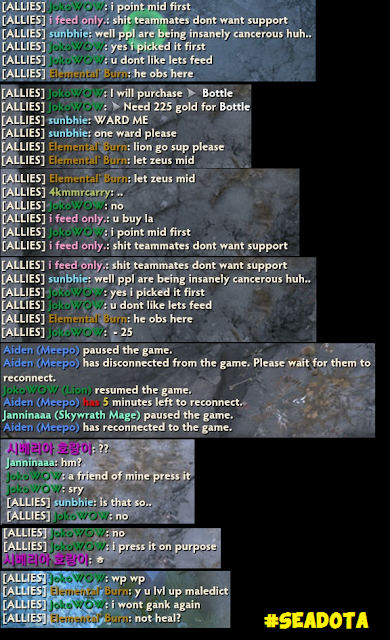 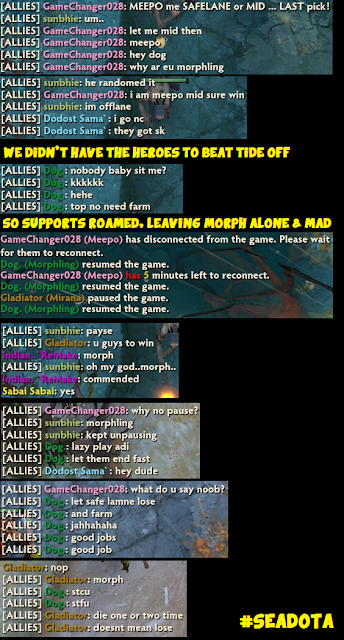 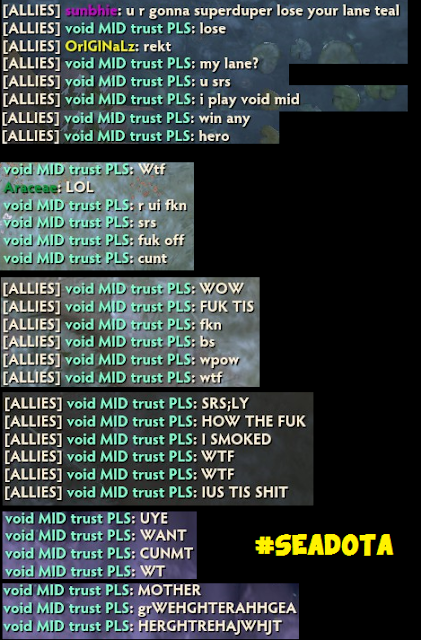 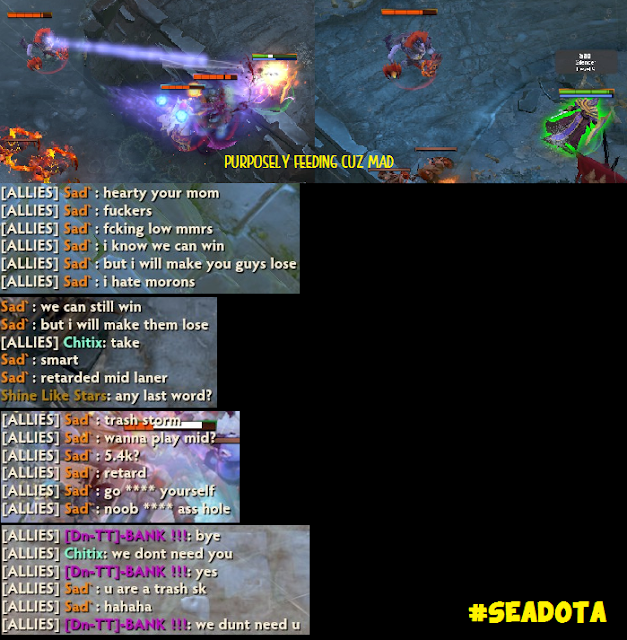 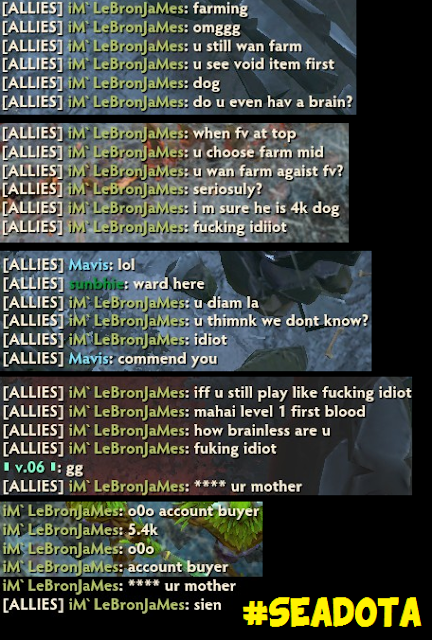 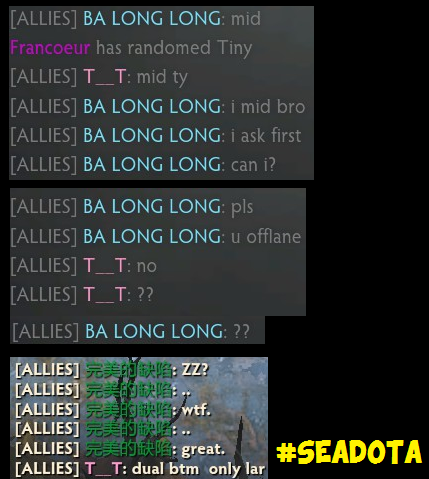 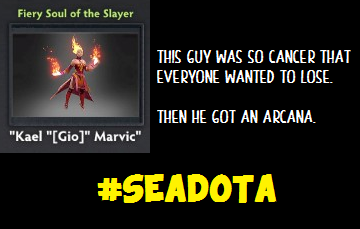 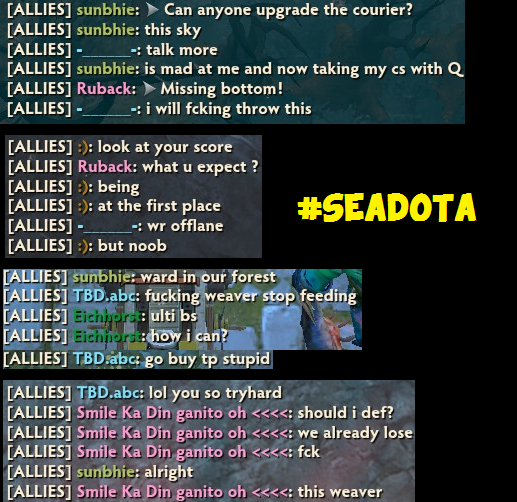 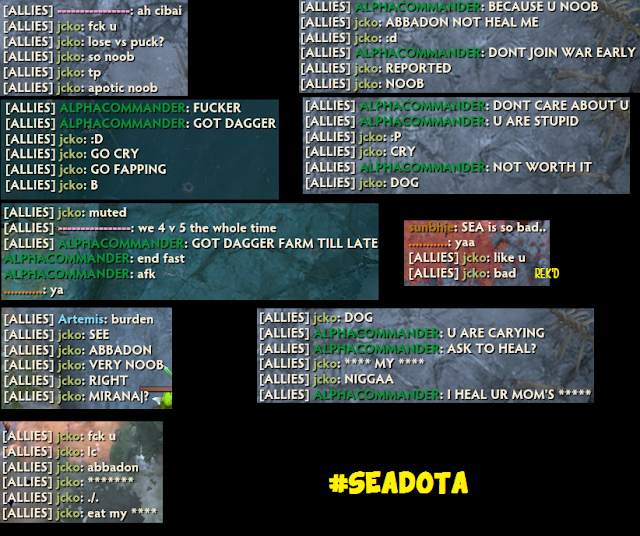 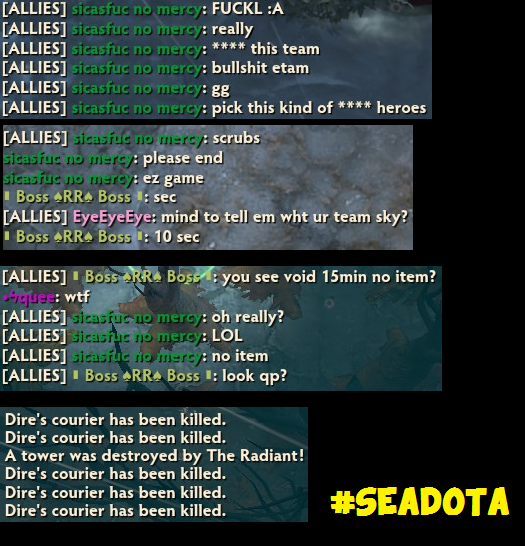