This is sort of a response to Meracle being upset with team Malaysia.  You can read about it here.  Now, I don't know what exactly happened in the lobby and what sort of tasteless things were said between the teams.  But I got a little upset reading Meracle's posts, and how people on fb and reddit are cheering his crusade.  I realize the people don't actually care, and Meracle's an easy player to like from fans' perspective, and most of us that know more will choose to shut our mouths because we don't want to succumb to drama.  Because that's what it's really about, isn't it; drama.

But I do want to explore why I feel disappointed about this whole ordeal.  I don't really care for my opinion being heard, because otherwise I'd just post this on his facebook.  But yeah, fuck that.  No one reads any of the shit here anyway.

Here's his quote for reference:

TIL it's shit trying to make friends with your competitors. I admit I may be unprofessional but holy fuck people don't have to keep whining to the tournament admins as if they are your god damn savior or something. Do you fucking think I don't have to wait 30mins as well when somebody in my team doesn't join the fucking game?


I'm fine with being disqualified for being late by admins and all that's fine. I just can't stand my opponents being a bunch of whiners. It's one thing to be professional and another to be a complete dick.


Continue being stuck-up and sticking to your "oh-so-professional" shit that I'm not buying. You just gave me a new found motivation to make sure you are never going to TI this year if we do meet in the qualifiers.

So, he's obviously upset.  Maybe some unnecessary things were said in the lobby, but it is as if he doesn't realize that he, being part of 5eva, is wasting team Malaysia's time.  While waiting is frustrating to Meracle as it is to everyone else, he is still waiting for his teammate to arrive.  He must share the responsibility of his team, and tank the humility when your teammate is late.  We are all human, and it's possible that people get upset when your teammate does not show up on time everyone had agreed to days before.

I've recently played against 5eva, and they're a great bunch.  In fact, we've played recently and our last three games against them had been a loss (Corsair Cup & Joindota MLG).  But I can't quite say that it's a pleasant experience playing them due to their persistent nature of being late.

In our last match against them, they were not 30min late, but over 40min late.  IIRC, we even had to rehost the lobby after starting because their 5th just arrived home (replacing the standin).  And during the match, we paused for another 20min where one of his teammates were supposedly ddos'd.  We were a gentlemen through all this nonsense, didn't present a single complaint nor did we say anything at all.  Because you know, naturally, beyond the whole professional attitude or whatever, we don't want to be shitty people.  Also, I'm much more sane and mannered in matches than when I'm being tormented in matchmaking. 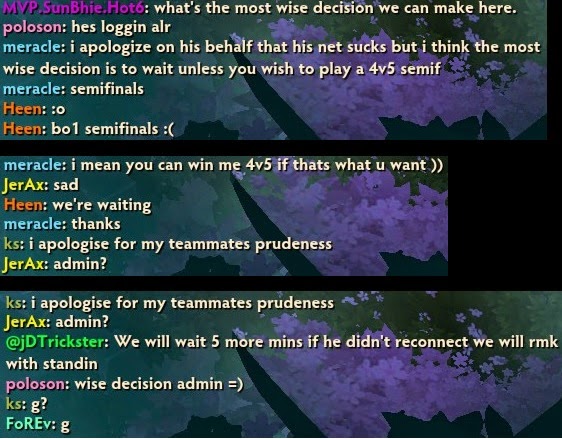 This response from Meracle did annoy us a little.  What's with this cunty passive aggressive attitude.  None of us implied anything stupid to happen (such as 4v5), and perhaps waiting was indeed the wisest decision.  I just wanted the admin to take control of the situation and make a verdict.  Which is something I am very weary of, as SEA admins are very passive (shit, the admins said nothing the whole time we were waiting and we didn't fuss).  There's really no need to be a dick about it.

This whole thing about being a dick in regards to team MY:  I think in some ways, being a professional means you should actively complain and correct the wrong.  Because Malaysia is definitely a team with reputation and influence to change what's broken in SEA, especially regarding the tourney culture.  If that appears dick-ish, perhaps you should try not being late.
Labels: Dota 2