Despite its importance, solo rank is a very poor experience of the game for me and I rarely enjoy it.  I mean, I think I only really play it to get better which is sort of sad.  But I'd like to know those that actually enjoy solo matchmaking.  IHL was fun, matchmaking is miserable.  I think a lot of it has to do with just how complicated dota is, and I don't know if these are even fixable.  The public awareness of what should be a standard dota etiquette is often way, way below the acceptable range, and that can be stressful.  Note that this has little to do with one's ability to play the game, but just small things related to making the game run smoother for everyone.  You know, standard dota stuff that should be common knowledge.

Even something as simple as courier etiquette is a problem.  Sidelanes should try their hardest not to use the courier before mid completes boots and bottle, preferably even up to a TP.  And if they must use it, they should at least click on the mid player and see his gold before committing to courier usage.  But no, bad usage of courier happen so often and it just makes the game that much shittier.  I don't really blame the players either.  It's superbly annoying, but who's to teach them that this is wrong?

Here's another: As mid, I am playing worse than expected, or being ran at.  Something unfortunate happened and I'm having a rough game.  The bounty rune at bottom is being jacked by an inconsiderate ally, or otherwise I just have no access to runes because it's a tough game.  At this point, bottlecrowing, though not great, is still the best option I have.  It's also something that my teammates super duper disapprove of.  Even the asshole that jacked my bounty rune is saying all sorts of rude things in his mother tongue (putang ina bobo!).  Note that Icefrog isn't against bottlecrowing, he just wants it to be less potent.  And in competitive setting, no one is complaining, it's not an uncommon thing for mid to hog courier as long as he needs it (often up to around 10min).  In the least, teams can plan their courier usage smarter so it doesn't become a bigger hindrance than it needs to be.  It's certainly a different story in pub setting though.  But again, who can you really blame here?  The game clearly wants players to upgrade courier at 3min, but it's not at all uncommon to see no upgrades until 8min for whatever silly reasons.  And here I am, with the same pool of players who are capable of same feat, explain why the mid need to bottlecrow and that is the correct action?  I may have better luck solving the Israel-Palestanian conflict. Example of poor general understanding dota that cancers up games


Dota's public understanding of the game is just really shitty.  Even in 5k bracket, supports often cry of being a "solo support".  Players get mad that they are the only one buying wards, and go on a strike and stops buying wards until the other support does.  That is, if I am lucky enough to even have a secondary support since some genius released a spanking new AFK jungle Necro guide for everyone to try.  Then they both squabble over this for far too long and the games get cancerous.  I have no clue what game they think they're playing because the concept of "solo support" is what dota had been for years and years.  One support buys everything and we call him the ward bitch 5 role.

The game is absolutely terrible at teaching players the basics.  Quality control is basically non-existent because of this, and every game is a headache over trivial, yet important shit.  For me, in SEA servers, it's not surprising to have maybe one or two meaningful games out of ten, and even that may be a stretch.  It's not unusual to hear the players from both Phoenix and Hot6 lose their goddamn minds on a daily basis over their pub games (it's a wonder we don't get police to show up at our doors, we can get real loud at weird hours).

As far as pickup games go, IHL were the most enjoyable since there were quality control.  Obviously a lot easier than matchmaking, since the quality control was done by players (often via incessant flaming).  The minimum competitive standard was kept in these games and players made sure of that for their own enjoyment.  This is probably also why the newer players can't handle IHLs because they get told of all their bullshit and their fragile ego can't handle it. 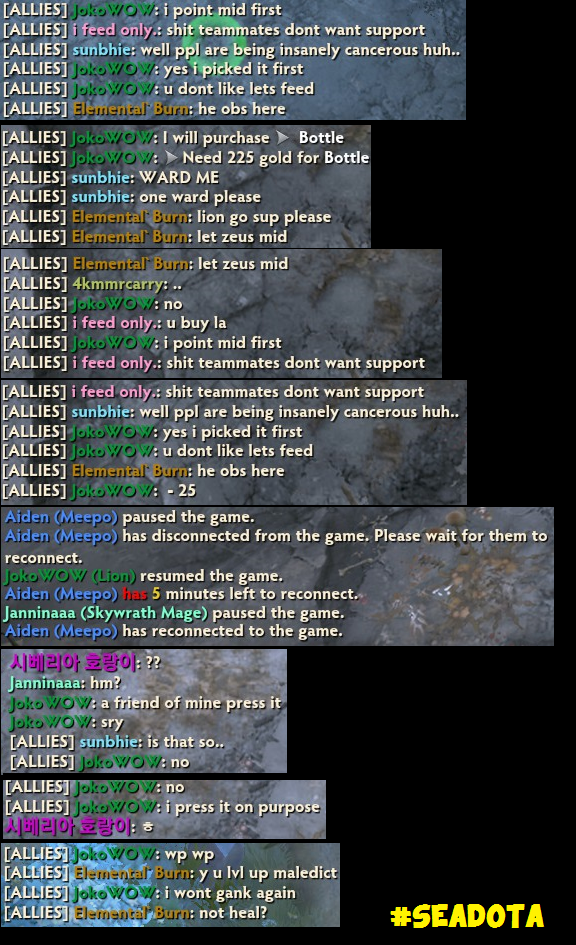 At least this was kind of funny

I strongly believe dota needs a better matchmaking system.  There's way too much silly things that happen because of poor system in my opinion.  Leaving so much at the integrity of players is what results everyone wanting to play cores, and bicker over roles.  It's cute too because we have some dota playground rule of "whoever highlights minimap first gets to secure that lane", and it's certainly not sacred enough since it gets violated enough times and that's another reason to bicker and argue.  In League of Legends ranked games, highest rated player gets to pick first.  That's also like the game's way of putting these 4k's in their place and c'mon, that's hilarious.  I have no problem playing supports either, I just want the picking stage to be less stressful.  As Dendi had said before, if you are good at dota, you should know how to play every lane.  You should know how to play dota.  Also, there needs to be like a hardcap of how low of players I can meet.  Some real quality control.  There's no reason why I should be encountering 4100 players.  I believe challengers in League of Legends do not meet anything below Diamond 1.  There needs to be a line, maybe at like 5.1k.


Or maybe it's just SEA that's exceptionally terrible, which is very possible.  I've also lost like 400pts since I've enabled my mic again.  I should probably mute myself since I'm likely to be more cancerous than I want to be.  Either way, writing this reminded me of how much I miss and enjoyed IHL.  Good times.
Labels: Dota 2