Here in Korea, our gaming house is close to Dongam station (prounced dong-ahm).  Much like the rest of Incheon, it's pretty ghetto all around.  All around the station are street vendors, cheap and ugly fluorescent lights everywhere, old merchants with bent backs who are there day after day under a scorching sun, brothels, motels and etc..  It captures a 90's Korea, something that reminds me of my childhood, and reminiscent of a cheap but strong drink at a grummy bar.  It isn't pretty, but that's the point.  Its got culture.  Something much of Seoul has lost I'd say (WHERE'S DA SOUL, SEOUL??).

Anyway, 2104 Asian Games are coming to Incheon, which I guess is like a mini-Olympics of sort but limited to Asia (I dunno lol), and they're cleaning up the city of Incheon.  Perhaps long overdue, since again, the city is ghetto as ballz, but not without the cost of livelihoods of some unfortunate people.  Which in this case are the street vendors nearby (but not limited to) Dongam Station.

So here's the deal.  These street vendors who run pojangmacha are more specifically street food vendors (imagine hotdog vendors in North America).  They've been there for tens of years.  They're not quite legal as they're not authorized to occupy space in front of Dongam station let alone sell food.  Food which come of unknown sources and I think it's possible that some of these vendors cannot pass health inspections.  Not paying taxes never help when running a business either.  Although, from my one sample of interview with the owner, she seemed to think that paying fine is equivalent to taxes (unfortunately for her, that's not how this shit works '~').

Anyway, these pojangmacha's have been part of Korea for so long, it's sort of become an icon imo, part of modern Korean culture.  Hell, I've seen policemen eat from these places, a family man, a high school girl, a working lady of mid 20's and Jubei, our local black man who asked me, "why can't we eat this every night".  Well Jubei, clearly because some evil man high up in political chair hates you.  A cup of oden soup in a cold winter's day would make you forget the terror that lies beyond the wall.

I've been here already almost a year.  I've seen how this develop over some time.  I can't say I have every detail, but the vendors were given a decent length of notice to scrap their business.  Well, that's a problem because you see, that's all they got.  That's their livelihood.  The city of Incheon has given them no options but to close down their business.  No options of working with them, or providing a way where everyone can coexist in peace or building an infrastructure where they can run a legitimate business or nuthin.  They were given but only one choice; death sentence eviction.

And I don't know if any vendors took the threats seriously.  It probably did not matter if they had or not since these people probably have no other options in life but to continue because that's literally all they got.  So they went on day after day, slowly approaching D-Day.  Then one day, they were gone, then began the reconstruction of Dongam station sqaure to promote a more cleaner environment.  The clean up for 2014 Asian Games seemed to have worked, and the station was certainly looking much cleaner.  But at what cost? 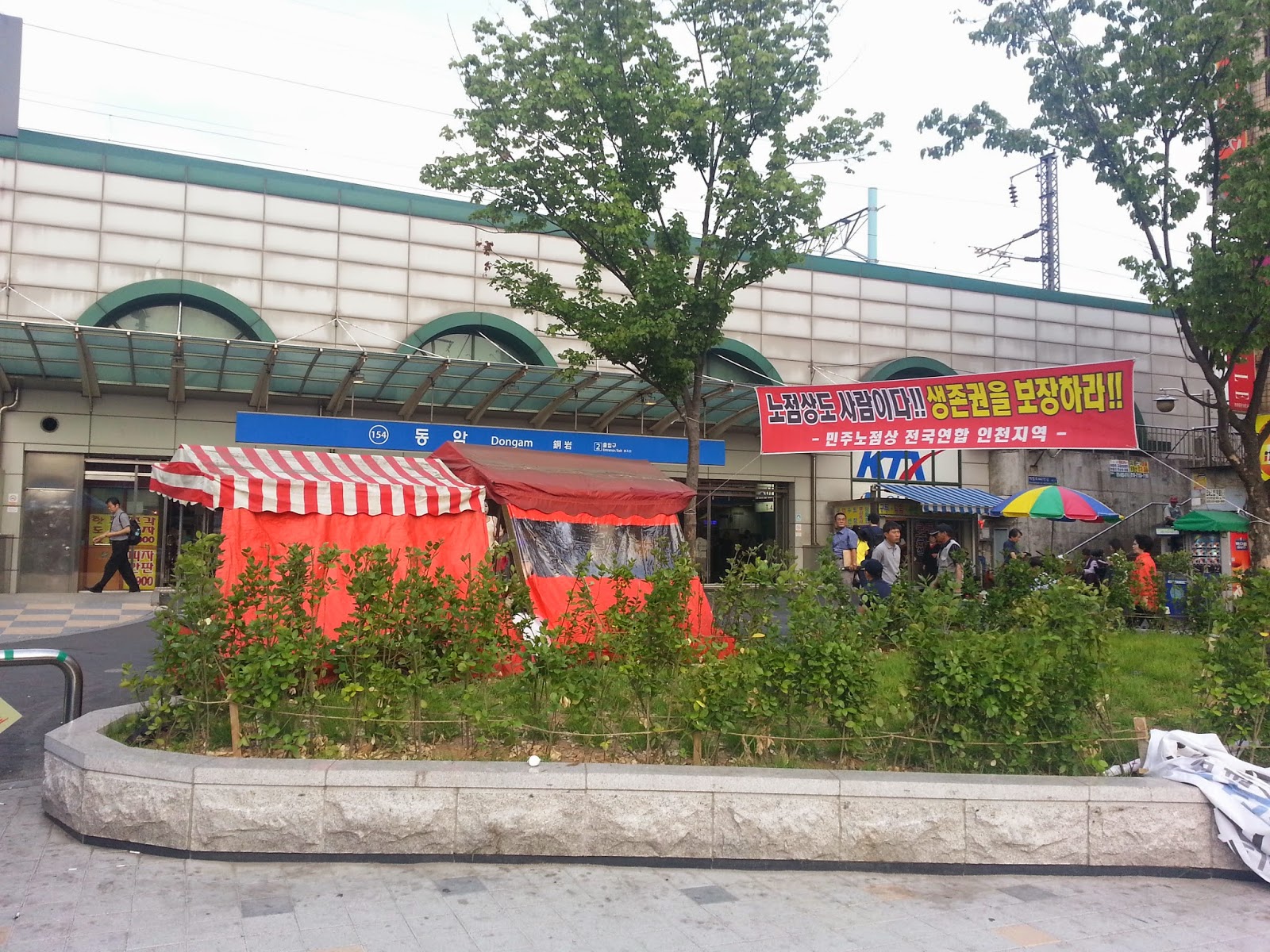 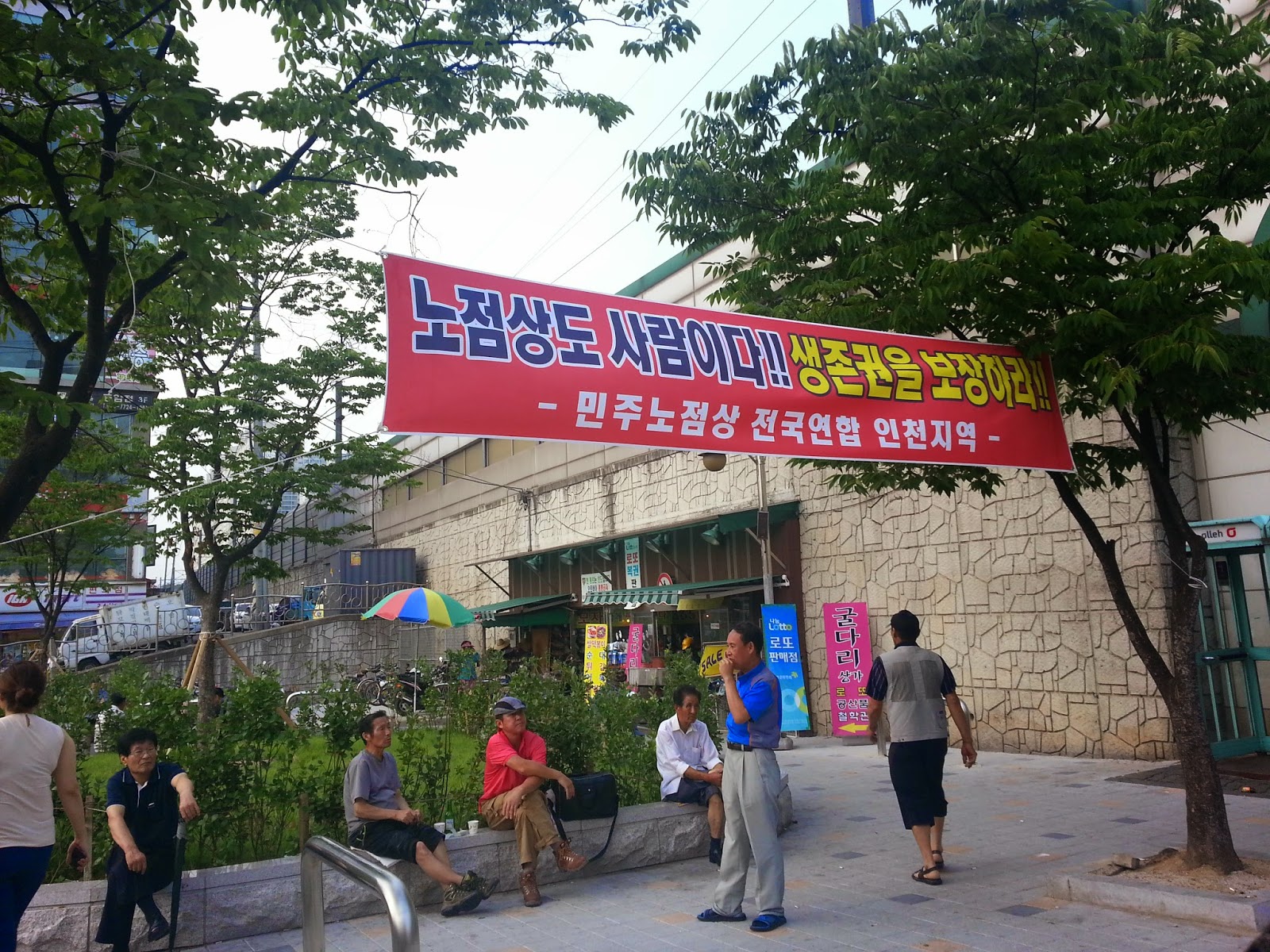 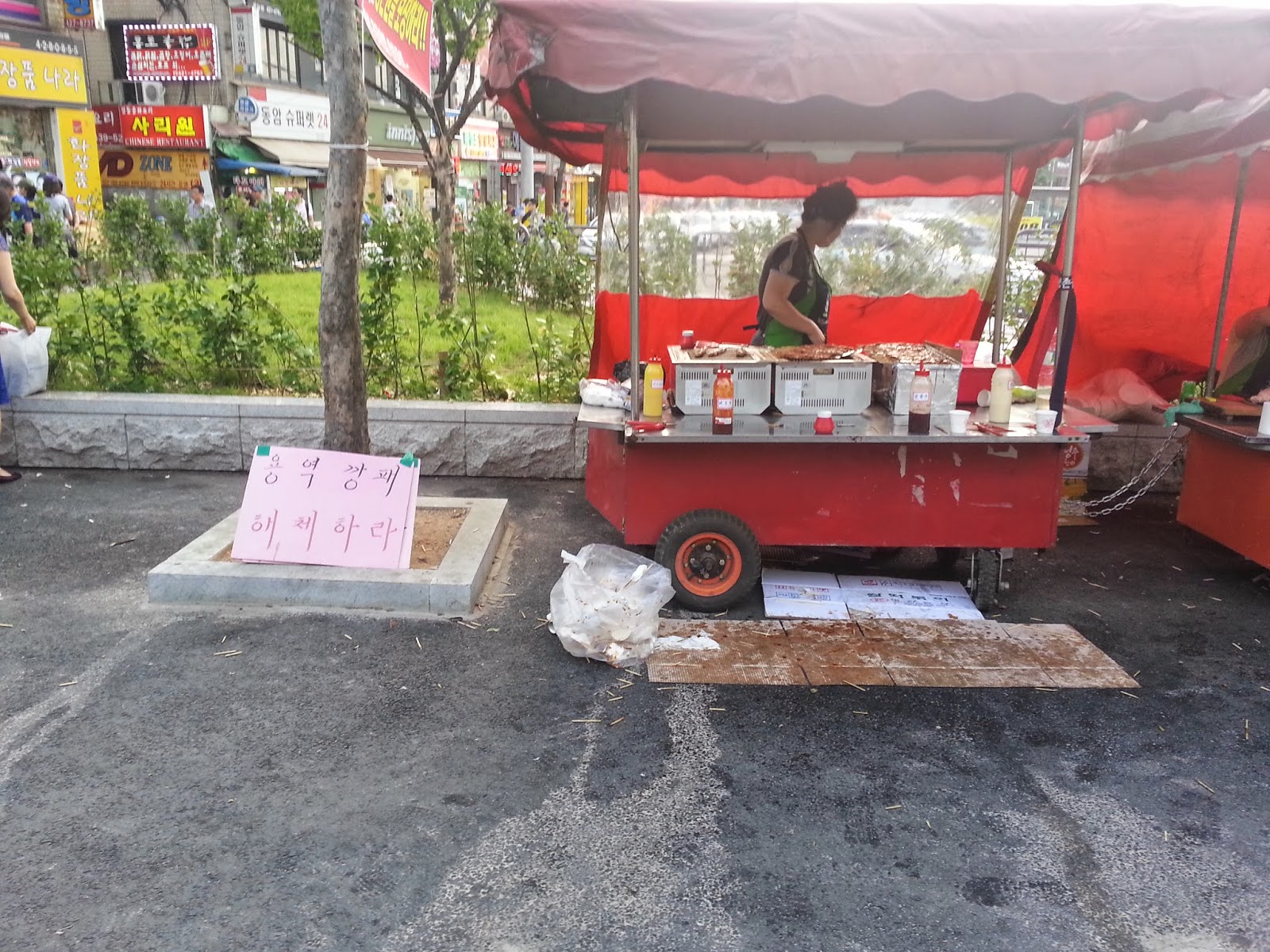 Soon, the street vendors were back in retaliation against the Incheon city, fighting for their survival.  This brave woman above even set up shop, selling Korean pork kebabs (  that shit's delicious by the way, only $1.5 for a fuckin' kebab, man).  By the way, she was never seen again after the day I took this photo.  I hope she's alright. 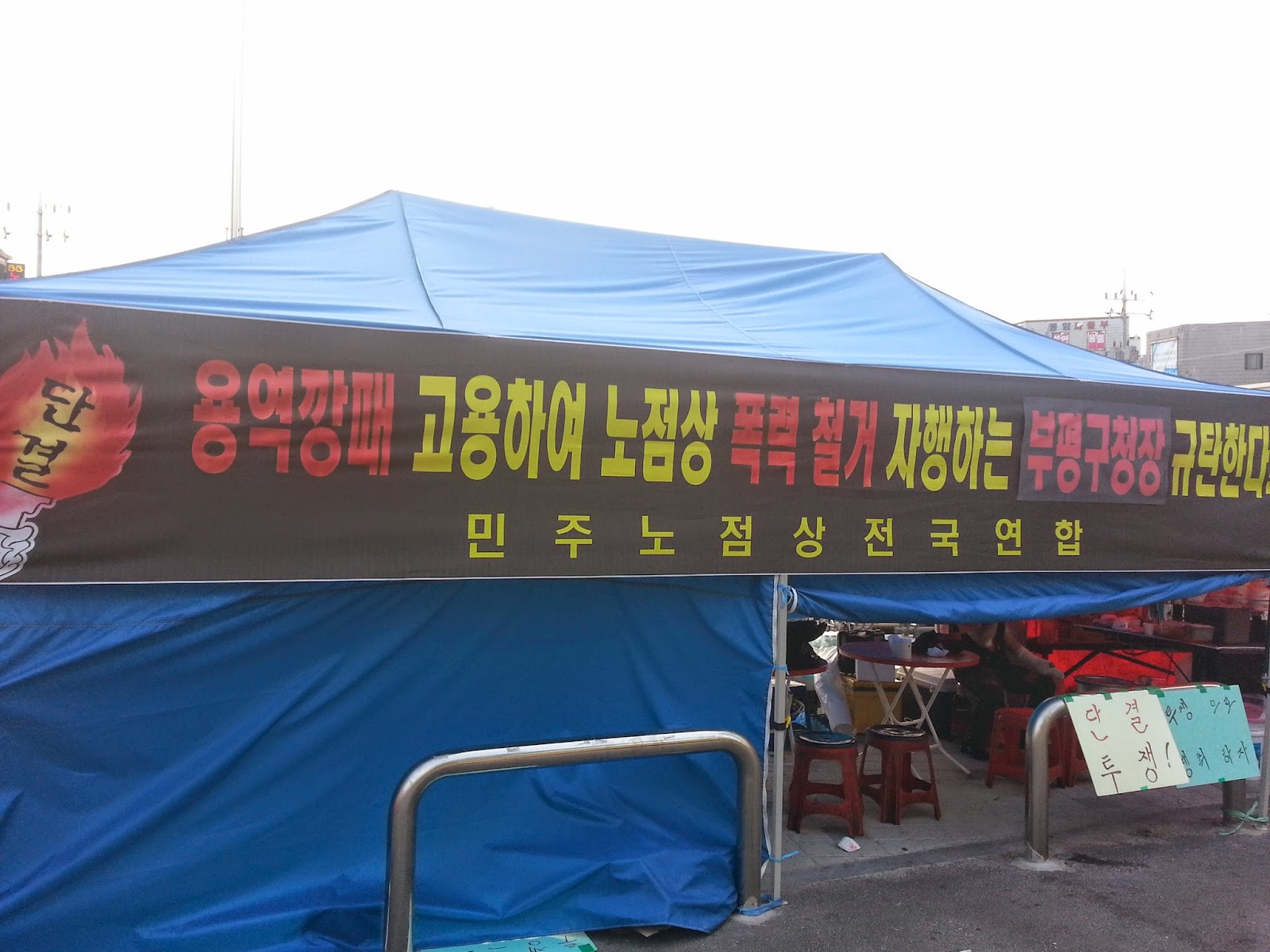 They've set up a tent for demonstrations of sort
The sign roughly reads, "FUCK YOU MAYOR OF BUPYUNG FOR HIRING THUGS TO BEAT US INTO SUBMISSION"  .... roughly. 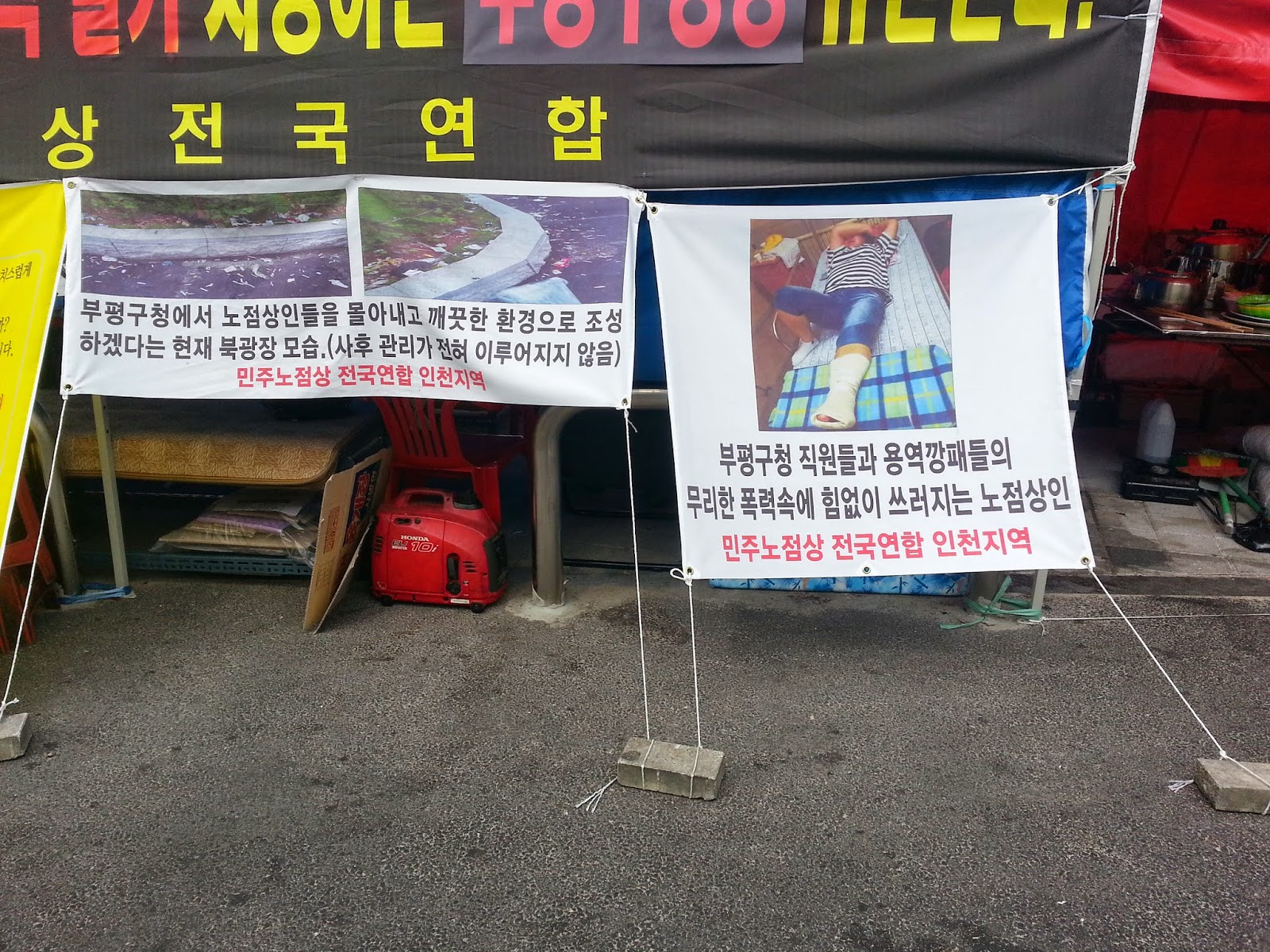 Sign on right showing how thugs have assaulted a vendor

So, I guess this is a thing in Korea.  A dreadful remnant of Japanese occupation we regretfully chose to keep when government hires "demolitionists" who are more or less thugs that forcefully vacate illegal occupants then demolish whatever is leftover.  A tradition strong continuing from the days when we first laid the train tracks in Korea.  Apparently the police turns a blind eye to this kind of brutality. 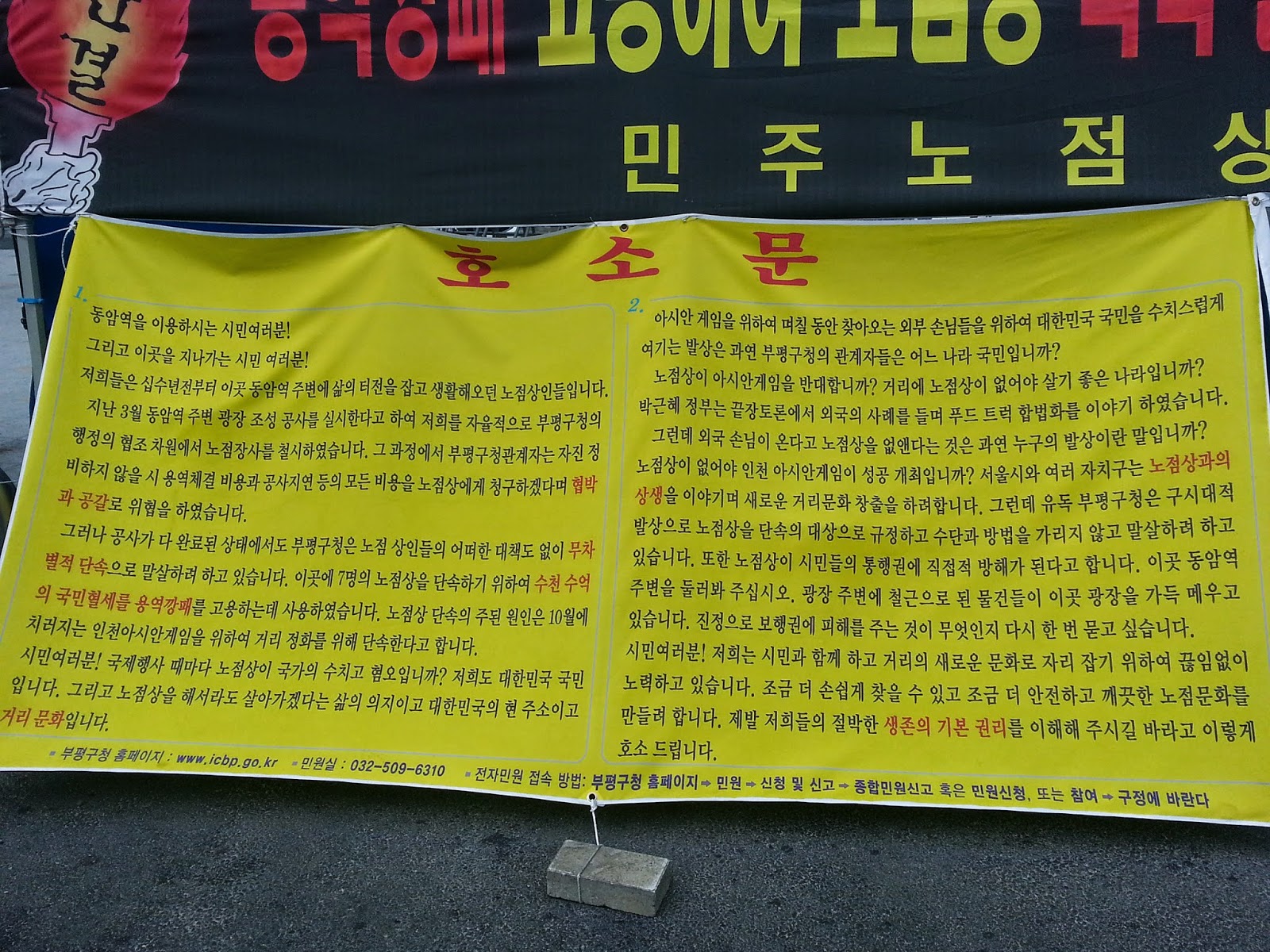 Letter of Plea, asking the good people of Incheon to help their cause of survival

I've seen Hotel Rwanda like three times man (fun fact: Heen's a Rwanda Genocide survivor).  I know how this story ends: Nobody's gonna give a shit and what will ultimately happen will happen.  We are all but Joaquin Phoenix's shunning away from the Rwandan girl (DAT DOLLAR FITTY KEBAB DOE) that we banged and running our asses into the jeep.

These people are powerless and their fight futile.  Worse, no one cares.  Do you know how I know (other than that I've watched Hotel Rwanda like seven times??), because no media outlet in Korea is ever talking about this at all.  It's absolutely crazy.  Hundreds and thousands of people commute through Dongam station everyday, and yet I see no news of it anywhere.  I have googled and naver'd (aka Korean google) about this matter in so many variations already and literally no one mentions any of this anywhere.  No blogs, no news, no nothing.  These people are invisible to the media and people around them.

I'll be frank: I'm hardly the caring type, especially when it affects me little.  But seeing that no journalist worth his salt gives two shit about the social issues within 1km radius of his goddamn existence pissed me off enough to write this.  This way, at least like three other people in this universe will know of the injustice here in Dongam station and ridiculousness that take place in Korea behind the neon lights kpop eyeliner boys and girl idols with hot pants and oh so nice legs.

It's not like the vendors and the city can't work together either.  If anything, the vendors want to work together.  In Busan, near Haeundae (the beaches), I saw a street full of pojangmachas and they were properly unionized and was legally ran.  All their tables were full, and people were having a merry ol' time, sharing their finest moments with others.  Why couldn't that be the case here in Dongam station?