It's actually been like forever since we've made it through the ro16.  I'm not sure really what to even talk about because it wasn't all that eventful.  So, I'll just write and see where this leads:

I think Nexon & GomTV meant to play the ro16 through three to four weeks.  Unfortunately, two of sixteen teams forfeited, and one of them belonged in our group.  This meant we only had to play two games instead of three.

Our opponents were NJ & Kids, and Ace Online. One thing for sure, we didn't want to lose.  A loss would lead us straight into FXO next round.  We had some information regarding the NJ & Kids who were our first opponent.  They had JesusStick and Park, who were formerly of TP, and (very) briefly teammates of mine. Here are some more character development for those two; JesusStick is a man of great humor, who also has a lot of heart.  Park is an incredible social person, who's on great terms with pretty much everyone within the Korean dota scene.  That being said, we had very little idea of who Ace Online were.

vs. NJ & Kids
It was really boring.  We just picked something really braindead like weaver, treant, abaddon and TA.  The treant, weaver, abaddon is something that works very well against weaker opponents because it comes in a 2-1-2 fashion, specifically designed to destroy a traditional trilane.  This forces teams to proactively address this shit or face a dire consequence.  And as expected, they did nothing throughout the entire game.  Weaver and I (Abaddon) did die at one point to a 4-man gank, but this wasn't all that beneficial to them as their Puck got picked off by a Windrunner that TP'd in to help.  If my TA had a TP instead of a fuckin' boots of elvenskin (450g) they would've paid a harsher price I'd imagine.

Frankly, I was a bit disappointed in both Park and JesusStick because this is something we ran often back in TP, and yet they seemed to have prepared nothing against this very strategy.  JesusStick later told me that his captain was dismissive regarding his opinion during the pick phase.  I think it's fine if they let us have the heroes we want, as I think it would be much scarier if they knew how to destroy our strat.  Sadly, they did neither, and lost the game haplessly.

vs. Ace Online
So, when you have an unknown team in a gaming scene, especially a scene that is as small as Korean dota, it usually means one of two things.  Either they're secretly good (unlikely), or just not good (very likely).  Fortunately for us, they were of the latter kind.  Although, personally, I'm both a little sad and mad... i'm sam.

These guys were fundamentally so flawed, to list them all would be a wasted effort, but let's try at least a few.  All I know is that me.gun played naix and he fought no one in his lane, at least for 5min or longer.  In dota, you simply do not leave a lane open in dota against another solo, especially not for a syllabear jungle.  The same player was extremely committed towards the creation of radiance until the very fall of his ancient.  He literally farmed to 3800g and bought himself a relic at... well, I don't recall the timemark, but it was about stop-fucking-making-radiance-already mark.  I recall being spiteful towards this poor sylla player (who's by the way, still oblivious to the fact that I hate the guy's guts) and aggressively ordering my team to slay the bear after I blink lifted it with rubick.  I watched the vod after (largely to check why my goddamn pudge who was pooled would lose courier and get fb'd by the opposing Puck, who's clearly an inferior player), and even the casters were like "maybe it's time to give up the radiance and build something useful".  this is why koreans are so hated in dota guys..

Oh, and my pudge being a clown is pretty funny.  He basically picked pudge to put on a show.  It wasn't necessarily the best pick, but we thought we had enough edge to execute it.  And I don't even think his pudge was necessarily all that fantastic.  It's pretty easy being a pudge when you have the freedom to take any position and hook fleeing opponents that pose no threat whatsoever.  Not to take anything away from his success, but no real praises needed either.  His success is all within the EV, especially when the team created ton of space for him to recover and perform (thank you based me.gun).  He did get flamed for his clowny courier + firstbloodedness, to which he did apologize to the team for.  And I think all of this is very important to being a team.  Everyone has their flaws, but you embrace each other's flaws and cover for them because that's what being a team is.  Yeah, friendship! Love! Hope! Korean!!

The games happened on two separate days, and when it was over, we were glad to make past the ro16.  It was not an amazing achievement by any means, but we were grateful for making through it safe and sound. To celebrate this, we went for some beer and chicken. 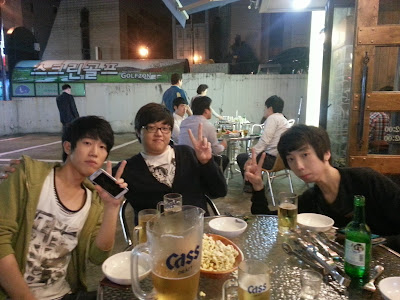 From the left: S4L aka Satan, me.gun, and CHOAYA
It ain't a picture of Asians without the V~

Ah.. what else to say... that interview girl of NSL is really cute.  I don't think the broadcast does justice but she's really pretty.  She really stands out among the crowd of Asians as a beauty.  Booth is sort of shitty. Keyboard, mouse, pad, all pretty shitty.  I think they expect you to bring your own gear.  I cannot play 100% in the booth, maybe like.. 70%?  I usually play on a very shitty resolution on my shitty laptop, so when I'm in the booth with a very large monitor, it fucks me up.  Now I see why Flash does all that crazy shit with his setups.  It's a much larger deal than I had imagined, not being able to play 100% robs from your hard days of practice.  Round of 16 is still not yet over, and I think they have one more week or so to complete the games.  It's taking forever, but maybe it's not a bad thing since we are a new team, gives us more time to prepare.  The commute takes quite a while, about 1:30 ~ 2:00 hours of travel.  And they require the teams to be present hours before it begins for preparation which, I don't think is all that necessary (to be all that early), but who the fuck am I to disobey them.  I'm just thankful that people give enough shit about dota to invest money into dota and providing me with this opportunity.
Labels: LIFEinKOREA