So, I guess I'll write a real, journal-like entries from now on about life in Korea.

Flight to Korea
So, I arrived here on 28th, and the flight was everything that I imagined it to be, and more.  After three months of hard work, I was looking very much forward to a time of doing absolutely nothing.  And I looked so forward to doing absolutely nothing for 13hrs.  I expected myself to catch up on reading, shows, films, play games, sleep, eat and fart.  Yes, both of them at the same time.  It was better than I expected because I got served wine, and the most delicious ass nuts I've ever eaten in my entire life. 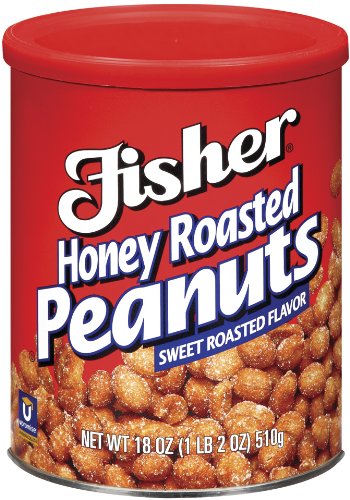 Alright guys, this shit is like crack cocaine in nuts form.
In fact, the little while sprinkle you see is the condensed cocaine.

I arrived in Korea at like 3:20 PM.  My uncle picked me up at Incheon Airport, which is like rated #1 airport in the world or something?  I don't know.  The first thing I noticed was humidity.  It was like 29 degrees when I landed, and I mentioned about the weather to my uncle, he chuckled and told me that the days like this is considered a clear, and dry day.  Which is crazy to me but I believe him.  I do remember Korea's summer being the worst shit ever, and this is like the end of summer too.

Another thing I noticed is smog.  It is smoggy as shit over here.  The sky can be a blur of blue in a clear day if it hadn't rained the day before (to clear out all the.. shit in the air).  To give you guys an idea, if it's a quick pour, your car isn't cleaned, it's shat on.  All the shit in the atmosphere falls down with the rain and when the rain dries, you can see all the dirt and dust on your car.  But if it rains all day, then it'll clear up eventually as it washes down.  Shit looks all blurry in the far distance too.  I thought it was fog, nope, smog.  Welcome to Korea motherfucker.  For what it's worth, I don't think a lot of this is our own anyway.  It's China's.

Oh, and it does smell.  And it ain't pretty.  I'm at like Northern Incheon right now, and Incheon had always been an industrial city with a lot of factories and such.  So it's particularly ass I suppose, but dude, the smell is pretty gross.  I mean, I knew the reality of it all already so like it doesn't bother me too much, but that doesn't make it any better.

Religion
One thing I remember about Korea is that when coming back home on a highway at night, I would see tons of lit crosses in red.  There are a lot of churches in Korea, and all of them have these crosses that light up red in night time.  I recall counting them as a child as we drove, and it really was ridiculous.  Religion in Korea is indeed a funny thing.  Christianity manifests somewhat weirdly among the Koreans, very much influenced by the traditional shamanism Korea inhabits.  It isn't all too healthy I think, as it breeds fanatics, and people rely a lot on miracles and magic. 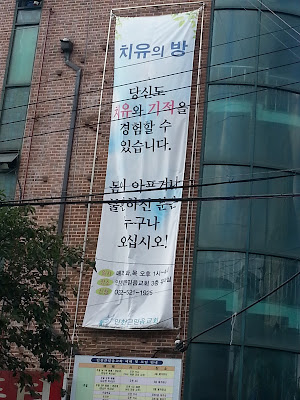 Take the picture above for an example.  It's like an ad of sort for some church, don't know exactly which church.  But the sign roughly reads, "Room of Healing.  You too can experience the miracle and healing.  All those who suffer and ill are welcome!".  I don't know what to say.  It's just crazy.

The Korean Etiquette
Korea is a country that is heavily influenced by a fundamentalist Confucianism.  As such, politeness and proper etiquette is heavily valued.  But it's sort of weird.  There's a lot of things going on here and it all collides with one another, creating a weird environment where one thing contradicts another.  Here's an example.  I was at a restaurant with my uncle, and the waiters and waitresses are treated like utter shit.  They very much practice the doctrine of "Customer is King", and it seems that most people overplay this card.  They treat servers very poorly to say the least, almost like a servant, and are easily bothered when their request is not met with ease.  Even my uncle, who had requested for some black pepper, was a bit bothered by the waitress who didn't give it to him in like, one minute?  Like fuck uncle, give her a moment, she's busy.  I'm sure she'll get around to it.  The servers' tolerance of shit-taking is really high too.  Customer is king, I guess.

The respect for another human being is very low.  If not almost nonexistent.  Remember, the same country that preaches strict moral values and respect for another, doesn't always follow them.  For one, I casually saw someone park on a firetruck zone.  And he double parked that motherfucker too because why not go that extra distance.  Like, what balls does he have to pull off shit like this?  And people don't stop the traffic and get out of the way when there's an ambulance.  All these things a reality I knew, yet still shocking and terrible, especially in a country as developed as Korea.

Here's where it gets crazier:  Mistreating people is such a norm that when I give each and every person respect, I feel like I'm getting hustled at times.  So my basic respect for human being is perceived as weakness and they try to rob me for being a decent human being.  Fuck me right?  I guess rough environment breeds rough people. 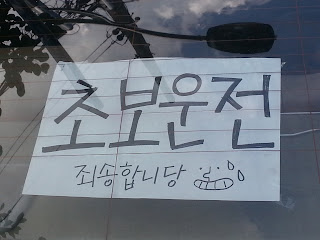 Then you have this.  Which is a sign that is often slapped on a back of a new driver, excusing himself as a newbie to others.  Oh look, compassion for another human being.  I bet you the same person goes into a restaurant and mistreats the servers too.  It's just so sporadic and random, and inconsistent.  I suppose this is what you can when you transform a poverty ass country into a developed nation in like 50 years or less, who still suffer terrible wounds from the Japanese occupation.  Just.. mix mesh of different values and cultures, manifesting in a wacky way.

Irrationalism
It seems like there's a lot of illogical and irrational norm among people.  For what it's worth, such thing aren't too vacant from the North American culture as well.  You ever hear two people talking, and one person says something absolutely ridiculous, massively generalized statement about something, and the other person agrees and says shit like, "that's what they say".  No, nobody says that.  Man, fuck you.

My uncle was having some bowel problems the other day.  I don't know what, having a difficult time pooping I suppose?  Not sure.  He's obviously not well, and in some level of pain, I ask him if he's suffering from constipation, and have consumed enough fibre lately.  And he just tells me that "I think I'm riding on the low level of physical condition at the moment.  You know how it is, sometimes your body just dips low as part of its cycle".  What?  What the fuck does that even mean?  No, uncle, body isn't like that at all.  It runs on chemicals and one must balance and maintain to be healthy.  And I'm sure your issue is the fuckery of chemicals in your body, not downswing that happens to hit you from time to time because magic.  I mean, I just agreed with him to disagree and moved on, but shit like this is like norm by the masses.  A lot of people just believe in senseless, non-scientific, unproven, illogical and irrational shit.

Now, again, NA isn't much different (for example, power balance).  But, people in NA can, and are expected to speak English and that is a huge boon because the accessibility of information is fucking massive on the Internet.  Koreans, unfortunately, cannot speak English all too well.  They're fed what they're fed, and many don't have the critical thinking skills to question what they're being fed.  So it becomes a norm, all these crazy, irrational stuff.  Speaking of which, there is no Korean dictionary equivalent of the word critical thinking.  George Orwell mentioned in 1984 about how one cannot express a thought if the word that describe that thought doesn't exist.  This is very true.  People often don't even second guess what they're being fed, because they don't know the concept of critical thinking.  This concept is completely absent from one's mind.