When I first arrived in Korea, I was on a team called Tiger Power.  It had Lee Seon Sang who was a known figure within the Korean dota scene, and JesusStick who became semi-famous through Reddit and TL.  It didn't really work out, and the team dissolved.  Luckily, I found another team with Satan, a player who is not entirely unfamiliar to the NA scene.  I don't think we had much impression of each other, if not at least a little negative, but we shared a common goal and PandaQ, a player whom we both respect sort of set the bridge for us.  Playing some games with this new team was like a breath of fresh air, and gave me some hope to the upcoming season one of Nexon Sponsorship League.  I played with this team for about two weeks or so, and we were called to arms for LAN qualifier on September 15th.

The qualifier was to take place at Shindorim Intel eStadium.  Eh, here are some pictures and shiz. 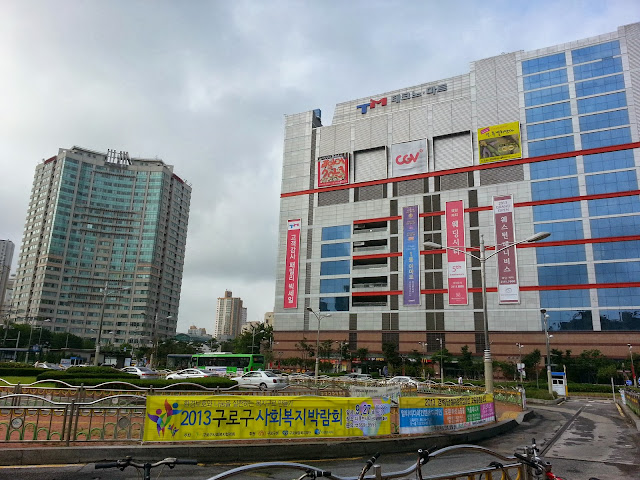 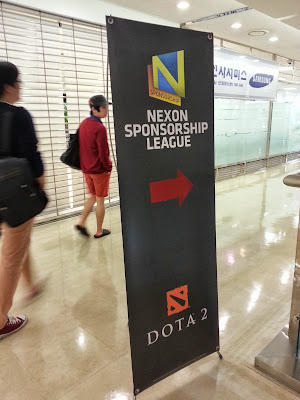 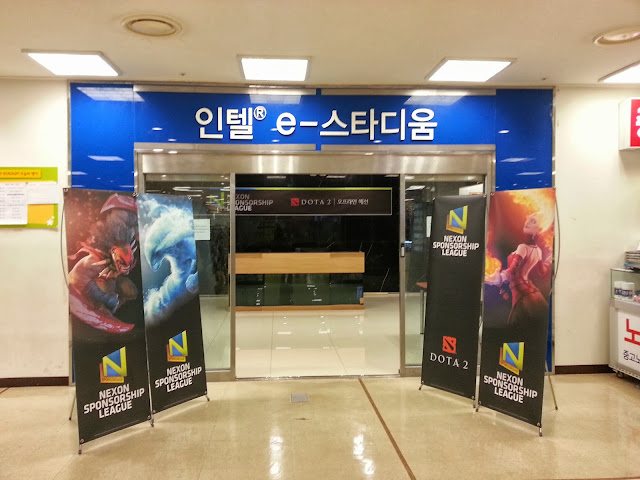 Frankly, it wasn't really much of a "stadium" as I was lead to believe.  It's more like a LAN centre, and it's used to hold official events at times for those in need.  Think of it as like a city banquet hall, but for like, gaming and other nerdy stuff.  Pretty cool still that these things exist. 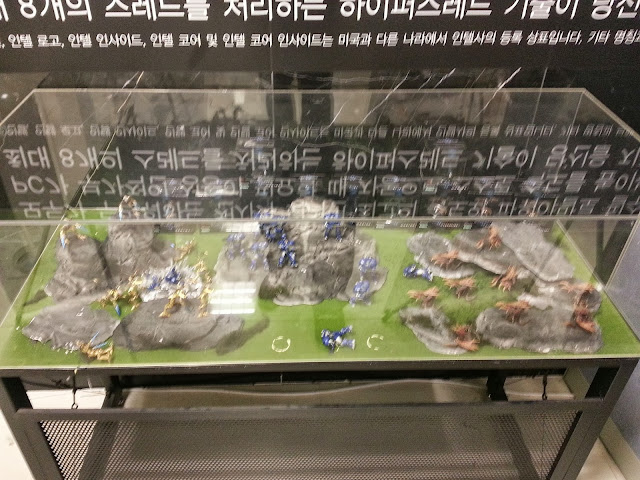 Cool mock battle scene of Starcraft 1 with marines, hydras and zealots
no, it couldn't have been SC2 cuz who fuckin makes hydras LOL 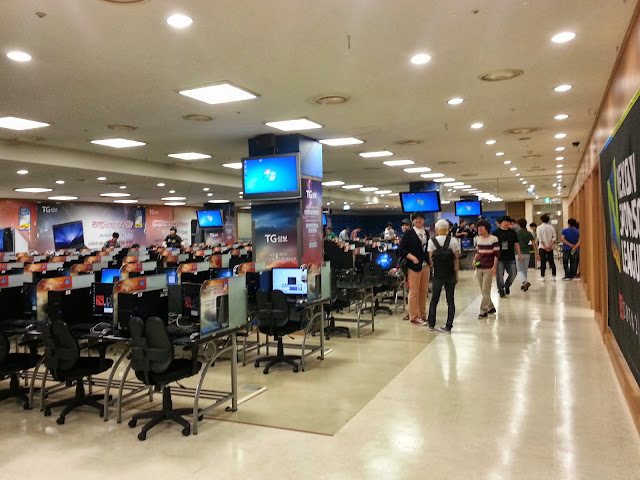 On the far you can see my teammates.  This was my first time meeting them, and it took a while to locate them because we've never seen each other.  It's pretty nice inside, with lots of PCs. 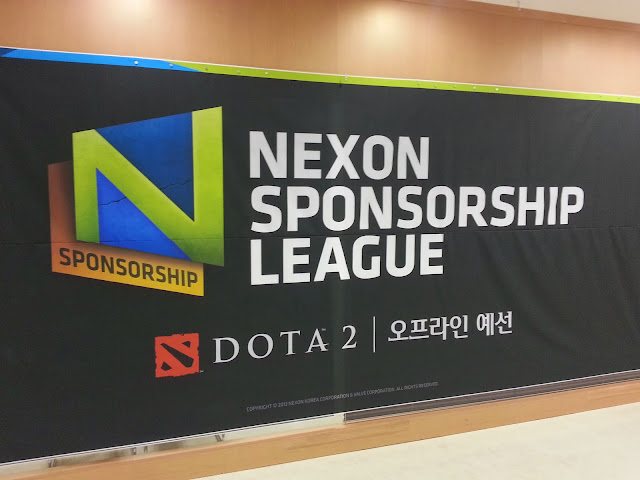 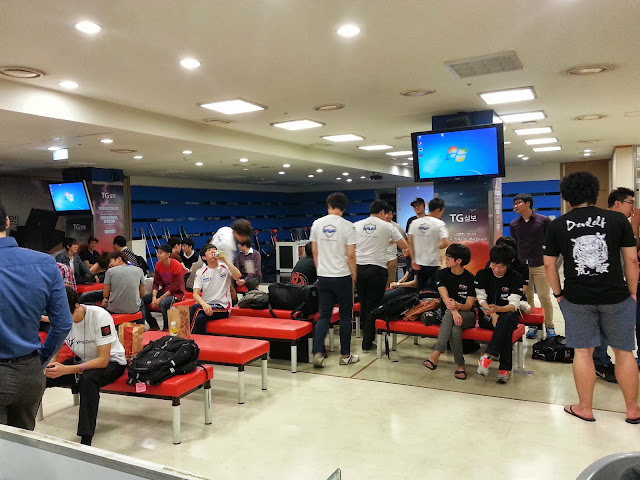 Players hanging out near the stage

There were only sixteen teams that showed up for the NSL qualifier.  They had much more that showed up in the first one; Nexon Starter League.  Like fifty-some-teams or something.  And apparently that was after the filtering of teams already.  They filtered even more for this one; Nexon Sponsorship League, as it used team matchmaking rating.  So while many have signed up just as they have in the first one, most of them were dropped for quality control because frankly, it's tiring as shit even for Nexon employers to handle this shit when majority of them were signing up just for shits and giggles.

You can see some of the sponsored teams here; MVP, EoT, and Virtual Throne Gaming, whose maker is none other than the WoW legend Drakedog himself.  He doesn't play dota, but he manages the gaming club, and is under their WoW division (I believe).  This little lounge here by the way, ended up smelling like sweat and piss for some reason in a very short amount of time.  I stayed the fuck away from it. 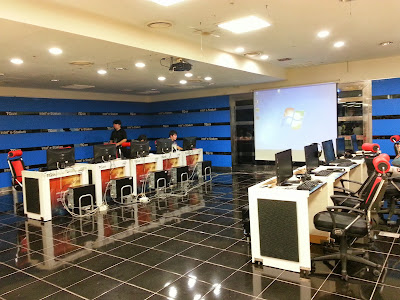 Right beyond the little space of lounge there is this modest stage for more official matches.  The seats were assigned randomly for teams in this event, and we were lucky to have the station to the left you see on the picture here.  The seats were nicer, and the setup may have been nicer as well.  I certainly enjoyed the roominess of it. 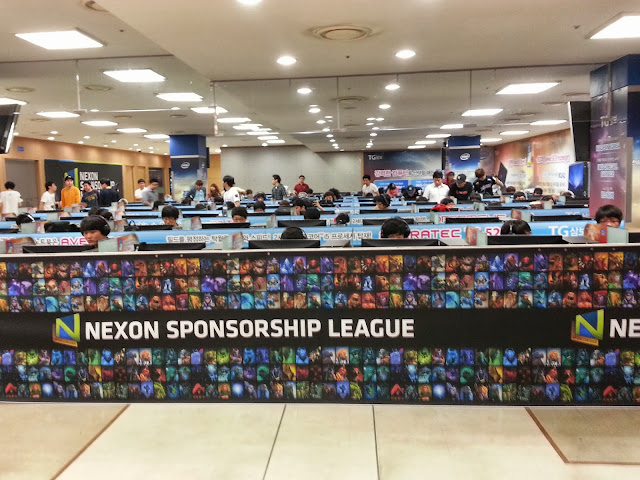 Teams setting up in their respective station 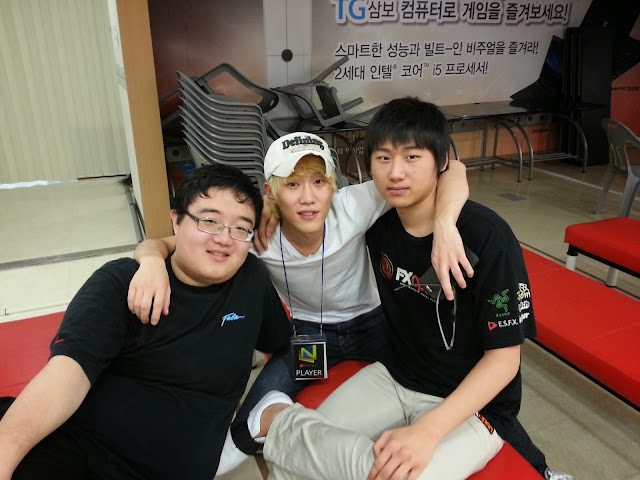 Funny how March, Febby, Satan and I are all from Toronto, and we travel to the otherside of the goddamn planet to meet again and play dota.  Kind of reminds me of that scene from the Rounders when all the regs from their poker clubs meet at casino.  Febby's gained quite a bit of weight and is looking a lot healthier.  He boasted his diet to me; pizza, chicken and hamburgers.  Jokes on him though, I'm still fatter, haha!  He also seemed a lot happier than I remember, or perhaps that's just how he usually is, goofy, and I just never really knew the motherfucker that well.  It's good to see that he's enjoying his time in Korea.  I think he's just happy that he's wooping the shit out of Korean dota scene and taking everyone's money, fucking dick.

I was able to meet Tenbird and his crew of birdgang (now the prestigious Startale) as well.  But I forgot to take photo with him.  Soz.

Funny enough, all the teams that were present were actually already qualified.  I think Nexon initially thought there would be more "quality" teams, and had expected to weed some out through a LAN qualifier.  But maybe they never quite realized how rough the scene really is in Korea.  So instead, the day was spent on figuring out the seeds for bracketting.  We managed to win all of our games, including our victory over EoT, securing ourselves one of four top seeds.  We then got some photos taken of us, some halfhearted interview (because these gaming journalists don't really give a shit and who can blame them), and that was that.  It was a pretty long day, and we were pretty exhausted.  Happy with what we had achieved, we headed home.  i mean i was down for drinks but ppl is bitchmade or some shit u kno

A funny anecdote, as we were the first to finish all our games, I was watching FXO play against MVP.  And before I went into a room for an interview, FXO was getting their shit handled.  Like 8-2 by 8min or something ridiculous, Febby's shadowfiend hustling his ass off trying to salvage the game and all other cores of FXO suffering all sorts of shit.  When I came out to see the game again, FXO won.  What the hell.  Later I spoke with a MVP member and he said they (regretfully) threw.  Ah well.  Das dota boyzzz.

After all this was over, we were informed to come for a photo shoot on 22nd.  They wanted an official Nexon team photo to use for broadcasting. 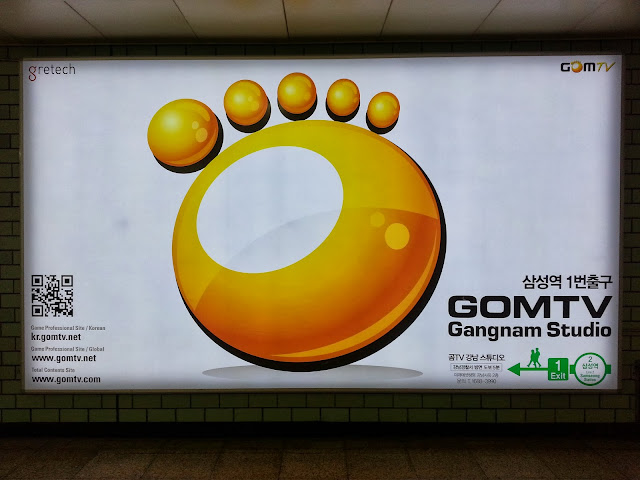 The photoshoot took place at GOMTV Gangnam Studio.  And the sign above can be seen in a subway station close to the studio. 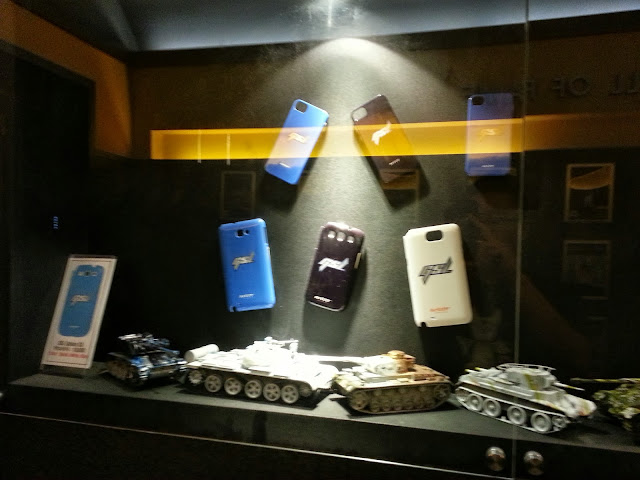 Phone covers for display, as well as a bunch of tanks, presumably promoting World of Tanks
fuck world of tanks

This, I believe was the very studio in which most of GSL games were held.  I actually used to watch SC2 in the beginning, at least the first and second season of GSL.  So it was pretty cool to visit this place.  I remember going to downtown Toronto at some theatre to watch the finals of GSL season 1.  I then went to a SC2 tourney the following morning and lost to who I think was fuckin Clairvoyance.  It was a ZvZ and I got shitwrecked.  Fun times. 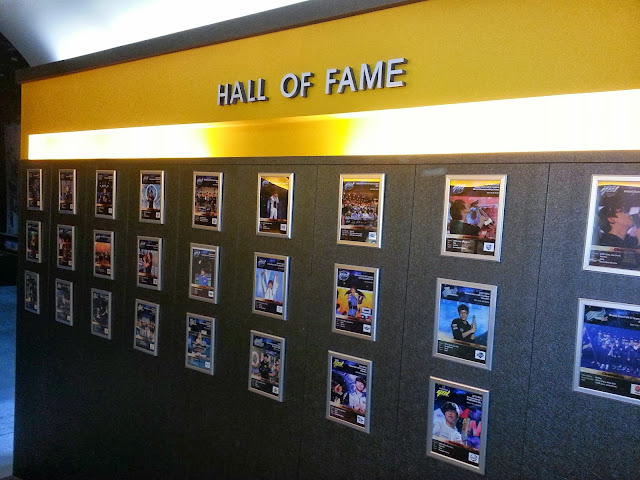 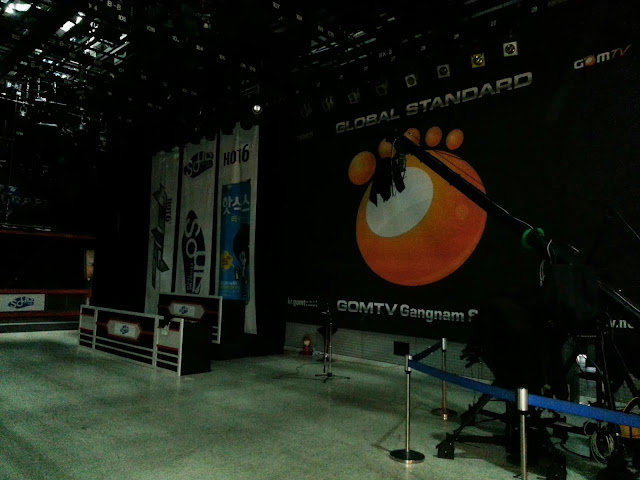 Since there was nothing really going on other than the photoshoot, the place was largely unlit.  It wasn't all that big, maybe can hold like 100 spectators, if that.  It has a second floor, but I didn't check it out.  The first NSL was held here as well.  You can see the player booth in the far left. 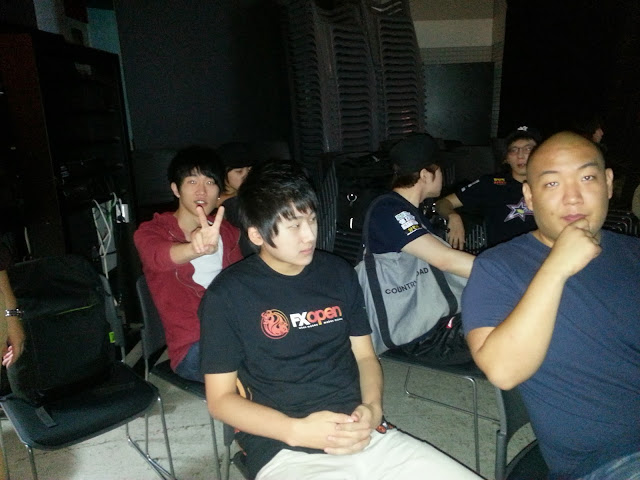 Photoshoot was pretty cool I guess.  They put all this shit on your face (i think they's called foundation) and pretty you up.  They took some profile pictures as well as some cringeworthy shit.

All in all, I was pretty touched by all the shits Nexon gives.  The amount of resources that is invested in this is pretty incredible.  The staff are nice, professional and hardworking, and I'm honored that they give as much shit as they do.  I know it's just a job for them but it's still nice.  Honestly though, Nexon employs involved in Dota project actually really care.  They are involved in the scene, and know what's going on.  So, shoutouts to Nexon for all of this.  I normally hate you guys, but the dota division are amazing people.